Well, here we are.

Did your candidate win or lose?

If you read my pre-election article (which our analytics team estimated 523,314 people actually read it so far), you know that I predicted Biden would win the popular vote, 156.7 million total votes would be cast (with national votes still being counted, it’s predicted that around 156.5 million Americans voted), and Trump would narrowly win the Electoral College.

But amidst the media’s current 24/7 clickbait stories regarding Trump’s allegations of voter fraud or Biden’s claim that it’s time to stop all the fighting (after Democrats shamed and canceled Republicans for four years) and come together in peace — some CRAZY storylines have emerged from the election that hardly anyone is reporting.

So, I’ll do it here with the 7 most interesting storylines from the election fallout. Hold on, some of these will shock you..

I. ELECTORAL COLLEGE LANDSLIDE? NOT SO MUCH 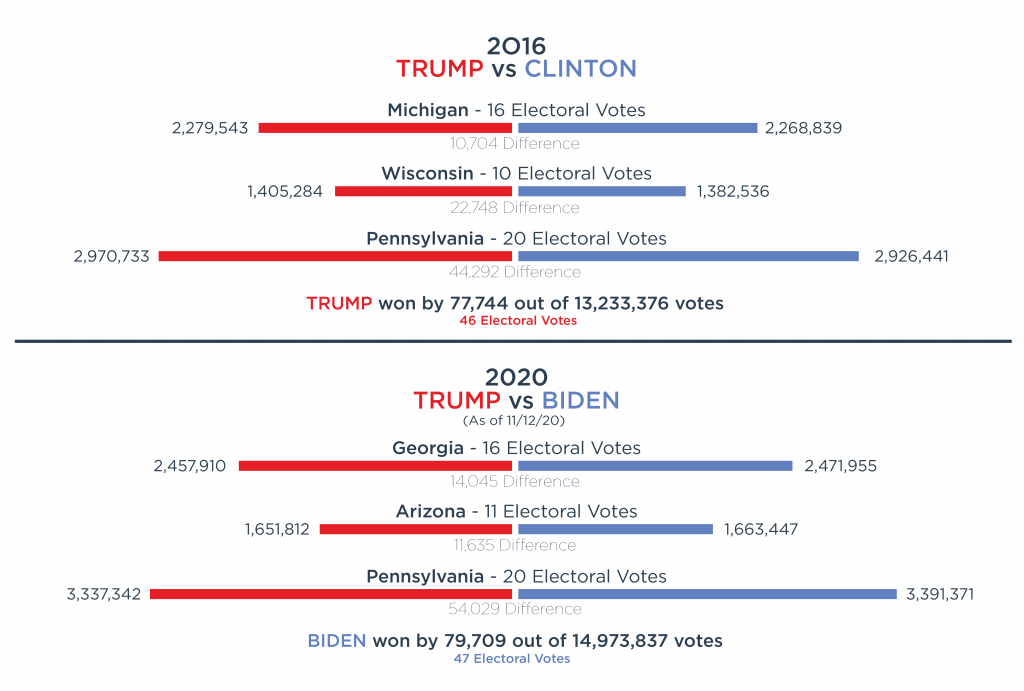 According to the current data, much like Trump’s win in 2016, Joe Biden did not win in an Electoral College landslide. Consider this:

Approximately 79,000 votes in Pennsylvania, Arizona, and Georgia put Joe Biden into the Electoral College lead — out of an estimated 156+ million votes cast … 79,000 votes decided this election, a difference of just .0005 of 1% (It reminds me of Donald Trump’s 2016 performance where he shockingly won Pennsylvania, Michigan, and Wisconsin by a total of 77,744 votes total). If Trump had flipped roughly 39,501 votes (this year) in just PA, AZ, and GA, he would have won reelection with 275 electoral votes (and if Trump had flipped Biden’s very narrow 20,540 vote margin in Wisconsin, he would have won 285 electoral votes).

Bottom line: This was an insanely close election even though the “mainstream” media’s pre-election polling told you it was going to be an Electoral College blowout. Never forget that … Every. Vote. Counts.

The national media polling was grossly inaccurate. There is no disputing this fact. This includes:

Imagine if the vast majority of polls you were allowed to see (the entire election) were conducted by right-wing media companies and right-wing educational outlets – and they all said Trump would win a massive landslide … but on Election Day, they were proven horribly wrong (in two straight election cycles like 2016 and 2020)? What would the liberal activists and media say about this attempt to “promote” Donald Trump instead of following proper polling data models? No doubt, they would have accused these “right-wing” outlets of voter suppression, racism, and ultimately tried to “cancel” them.

You may be asking, “Did anyone get polling right?”

Yes, a few polling outlets (who were often discredited by the major polling institutions before Election Day) nailed it. The following polling and research firms predicted a toss-up race: Invisibly (see their incredibly smart analysis here), The Trafalgar Group, Rasmussen Reports, and Susquehanna Polling and Research.

Regardless of this polling disinformation insanity, here is the truth — perfectly summarized the day after the election by Alex Berenson, the former New York Times reporter, best-selling author, and current data-obsessed contrarian, “Whether Trump or Biden ekes out a coin flip win does not change the fact the polls and media narrative were massively wrong. There’s no Blue (or Red) Wave here, no anti-Trump surge, just a deeply divided country.”

III. WAS THERE REALLY VOTER FRAUD?

I’m not in a position to say if there was or wasn’t voter fraud because I’m not on the front lines of key states right now. I am hearing from my Republican friends that it’s crazy how much fraud occurred. My Democratic friends tell me there is no evidence of mass voter fraud and Biden narrowly but clearly won. Like Joe Biden, I believe that we should have all the legal votes counted and certified before a winner is declared. And I’m biasedly suspect when the media tells me that Trump should concede because their rhetoric almost always favors the Democrats position. And going by the Democrats on words and past actions, I’m not sure what the controversy is in ensuring a fair election took place. This includes:

But if I’m also being completely honest, I don’t know if massive voter fraud occurred on election day. I’m drawn to this quote from Bret Weinstein, the liberal “professor in exile” and host of the Dark Horse Podcast: “It is not clear there was substantial fraud in the 2020 U.S. election, but it is clear there is valid reason for concern. Why is there not broad, bipartisan interest in finding out?”

Ultimately, Biden will be declared the winner AND some voter fraud probably occurred. Despite all of this post-election chaos, I’m sure of one thing: Trump will shed light on our country’s voting security systems. He’ll show how irregular and vulnerable we are to cheating when no other politician has addressed this issue in generations. I promise Trump will shine the biggest spotlight on it, expose it, and ultimately lead to voting reforms. Bank on that.

IV. HOW DID JOE BIDEN WIN THE POPULAR VOTE?

“Victory has a thousand fathers, but defeat is an orphan.” — President John Kennedy

First of all, mad props to all American voters who turned out in record numbers this year –even during a pandemic. Americans fulfilled their civic duty and that’s good for democracy.

Early results and exit polling data indicate a few factors that turned the election for Joe Biden. In fact, I’ve identified (in the data) three big issues that decided this election:

The previously discussed “Shy Trump Voter” that put the fear of God into Joe Biden supporters? It was very real.

1. It appears the national media’s polling deliberately failed to take the “Shy Trump Voter” into account (among other things). A few polling and research firms did account for it — the same ones I mentioned earlier — Invisibly, The Trafalgar Group, Rasmussen Reports, and Susquehanna Polling and Research. These firms ended up being the most accurate polling firms in 2020 because they all accounted for this voter.

2. According to the research firm Public Opinion Strategies (in a post-election analysis), the “Shy Trump Voter” represented 4% of the overall vote and 19% of Republicans — 64% of these voters were college-educated white women. 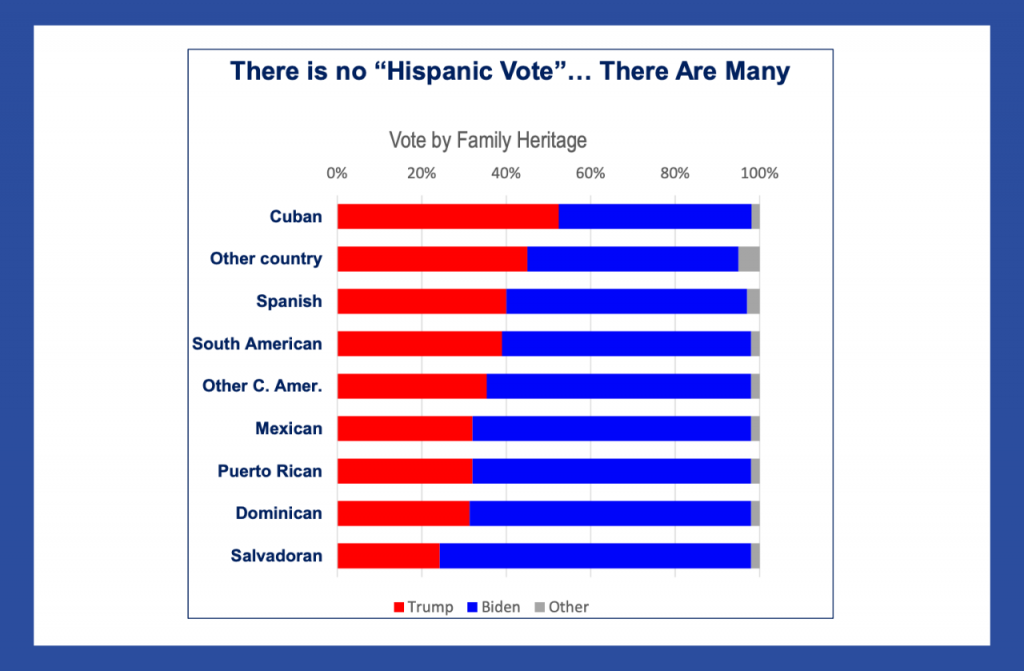 There is no dispute that Joe Biden won the African-American, Hispanic, and LGBTQ vote. But here is something that should scare the hell out of Democrats … Donald Trump received more votes from African-Americans, Hispanics, and the LGBTQ community than he did in 2016. How big? According to the exit polling:

3. Trump improved his standing with Hispanic men by 8%, from 28% in 2016 to 36% in 2020 (As you can see from the graphic above, some Hispanic communities voted overwhelmingly for Trump, like Cuban-Americans in Florida. Another example is in Zapata County, Texas, where Trump won this 94% Hispanic county, and it’s the first time a Republican presidential candidate has won the county since 1920).

4. According to data analyst Adrian Gray of AGC Research, Trump received 26% of the non-white vote this election. The highest percentage of any Republican presidential candidate in 60 years.

The big question the media is asking right now is: “How did this happen?” The answer is clear that these voters rejected defunding the police, cancel culture, and the media’s bias against Trump. They saw the media put them in a box and stereotype them as automatic Biden voters. Much like the white working-class voters of 2016, Donald Trump was their Molotov cocktail to this biased narrative.

Let me summarize these findings like this – to quote Twitter contrarian and host of the Ruthless podcast, ComfortablySmug: “Trump got the most non-white support of any Republican running for president since 1960. He really sucks at being a racist.”

VII. THE ENCORE: IT WAS A HISTORICALLY SUCCESSFUL ELECTION FOR REPUBLICANS DOWN THE BALLOT

If Joe Biden is certified as the next President, it will be a huge win for Democrats. But if you peel the curtain back on the entire election, it was a terrible night for the Democratic Party. Actually, it was an utter disaster. Let me explain:

The Washington Post’s left-leaning reporter James Hohmann stated about these gains, “Even if Biden wins, Tuesday was a bad night for Democrats in lots of ways. His performance with Latinos shows how the Democratic establishment has taken them for granted, and Dems failed to flip any state legislative chambers ahead of redistricting.”

National Journal’s Josh Kraushaar had this to say: “This is hard to believe: Dems didn’t pick up a single state legislative chamber in 2020. Republicans, against expectations, won the New Hampshire state Senate and the Alaska state House.”

CONCLUSION: SO WHERE DO WE GO FROM HERE?

I’ve written about how I see our political climate getting worse, not better going forward. After looking at the election results, I still believe this.

While I might have wrongly predicted that Trump would squeak out an Electoral College victory, the overwhelming evidence from this election makes it clear: the media is dangerously manipulating the American public (and has been for years) and promulgating chaos to sew divisions, get clicks, and make money.

They clearly engaged in a massive voter suppression effort to beat Donald Trump, and they succeeded without any repercussions.

Until we demand the media change with our viewing habits, by turning them off, expect the fights to get bigger and more dangerous.

Even though I’m coming off somewhat pessimistic, there is a part of me that is still very hopeful.

It also appears that Americans want to take a break from Trumpism, even if they like the job the President was doing (especially with the economy). As Erick Erickson stated about Trump: “It could be the public got tired of him, not his policies.”

To summarize, the extremes on both sides lost.

This election came down to voters wanting a calmer and more balanced government. The middle won.

Maybe our politicians should listen to that message and work together to save our country.

When you become a subscriber to my exclusive bi-weekly data insights articles, you will always get first access before anyone else. If you know someone that will benefit from these key insights, forward this article and/or data to them so they can use it in this critical moment.

Also, I am giving you FREE access to all of our data and surveys (+ our two data reports/surveys analyzing the protest culture on consumers) — just go to winbigmedia.com and click on the “COVID-19 Consumer Research” tab.