This post originally appeared at Outkick.com — you can also read it HERE.

The sports industry is in deep shit.

Since March, I’ve partnered with the largest data collection, analytics, and AI company in America to understand the economic fallout from the Coronavirus (and subsequent lockdowns) and the Black Lives Matter protests and riots.

Some startling insights have emerged in the data showing a major disruption to a number of industries.

How is this impacting the business of sports? These two generational earthquakes (occurring within three months) have disrupted their entire economic model in more ways than you think.

Let’s take a step back first- according to our initial three Covid-19 Consumer Surveys, the industries that are most ripe for disruption are HERE.

But we are just getting started…

Since June, consumer sentiment has changed even more — not only due to the Coronavirus but to the Black Lives Matter protests and riots.

And, this is where a disruption in the sports industry comes into play.

You might think that when the Coronavirus blows over, we’ll get back to normal. I’d tell you the opposite…as Lee Corso likes to say, “Not so fast my friend.”

A Harvard professor recently told me that the biotech industry (which he works in) believes there is a 5% chance a Covid-19 vaccine will be available in the next five years.

If I were to be optimistic, let’s say there’s a vaccine in a year. How long will it take to get 319 million Americans fully immunized (much less 7 billion humans) once it’s available? 24 months? Next, how long do American consumers suffer from the PTSD of living in a society with the Coronavirus for the next 3–5 years (at a minimum)?

This new disruptive emerging economy isn’t going away anytime soon and it’s going to have a massive impact on the sports industry.

Consider this…According to our data, the live events (sporting events, concerts, trade shows — anything with a large crowd) are in deep trouble due to the consistent and overwhelming desire by consumers for capacity reduction (in order to feel safe).

But it gets worse….

80% of American consumers don’t want to attend a live event until there is a vaccine (okay okay, SEC fans may be the anomaly but they will probably only attend partial games due to enforced social distancing policies).

To add to this, according to our survey data, between 35–45% of Americans need a vaccine before they will actively take public transportation, book hotels (including Airbnb, Home Away, etc.) or order a rideshare (Uber, Lyft, etc.). 52% of Americans want reduced capacity before they will travel anywhere outside of their state.

It’s kind of hard to run sporting events when leagues enforce social distancing policies and a portion of the customer base (fans) will also limit their attendance choices.

It’s not just the data, we’ve commissioned, IBM recently came to the same conclusion — 75% of their respondents said they were unwilling to be exposed to large crowds (for the remainder of 2020 at least).

How does this affect college sports? If the NCAA or conferences enforce limited ticket sales to attend games, what will fans choose? Outside events (i.e. college football) or inside events (college basketball)?

The winner will be outside events because it “feels” safer. But that’s not the real point. It’s the second and third-order consequences of these rules and choices that will further disrupt the industry.

Expect ticket pricing to be far more expensive for outside live sporting events, which will prevent budget-tight fans from going. Athletic departments will face massive budget shortfalls over lost ticket revenue, especially when their football stadium is half full or their basketball team is playing in front of 1,200 fans.

The question then becomes, what sports within a college’s athletics program will disappear without the revenue-generating subsidy that football and basketball provide? Can you imagine the lawsuits when women’s teams are cut?

But that’s not all…

When you add in the fallout of professional sports’ (mainly Major League Baseball) inability to put aside their selfishness and get back to work — and you include the nuclear bomb exploding around Name Image and likeness in college sports — you see these looming disruptions converging into a massive eruption.

This data I just described was commissioned BEFORE the protests and riots broke out too. When you take into account athletes imposing their woke opinion (outside of their sport), most fans will be or are already turned off.

Oh, I know you want to cancel me for saying this, but it’s true, the data backs it up. If you love fact-based data that no one can argue with, well get ready to be armed.

The new study, my data partner commissioned, tracked how consumers view the recent protests and subsequent riots — and I saw something that should make the sports industry very worried.

The vast majority of consumers aren’t woke and they don’t want a company, brand or service to inauthentically preach to them about social values.

If you are Nike or Patagonia, and you run an ad campaign based on social equality — the American consumer is ok with it, But why? They’ve been out front on this for years, far before George Floyd’s murder was in the headlines.

But the NFL attempting to be woke? No. They are full of shit and we can see it a mile away.

Laura Ingraham has been excoriated (and called a racist) by the woke mob for daring to tell Lebron James to “shut up and dribble.” But the data is clear — the vast majority of fans just want to watch sports and not be lectured by a Gen Z or Millennial athlete.

We commissioned this new post-protest data for our clients who’ve asked us about how Gen Z, Millennials, Gen X, and Baby Boomer consumer sentiment surrounding the riots will affect their business — and how should they respond. My answer — you don’t need to do it with an inauthentic message– it will turn off the vast majority of your customers (you reading this carefully, sports industry?).

Check out this graph from our data survey and look at it with this simple explanation: 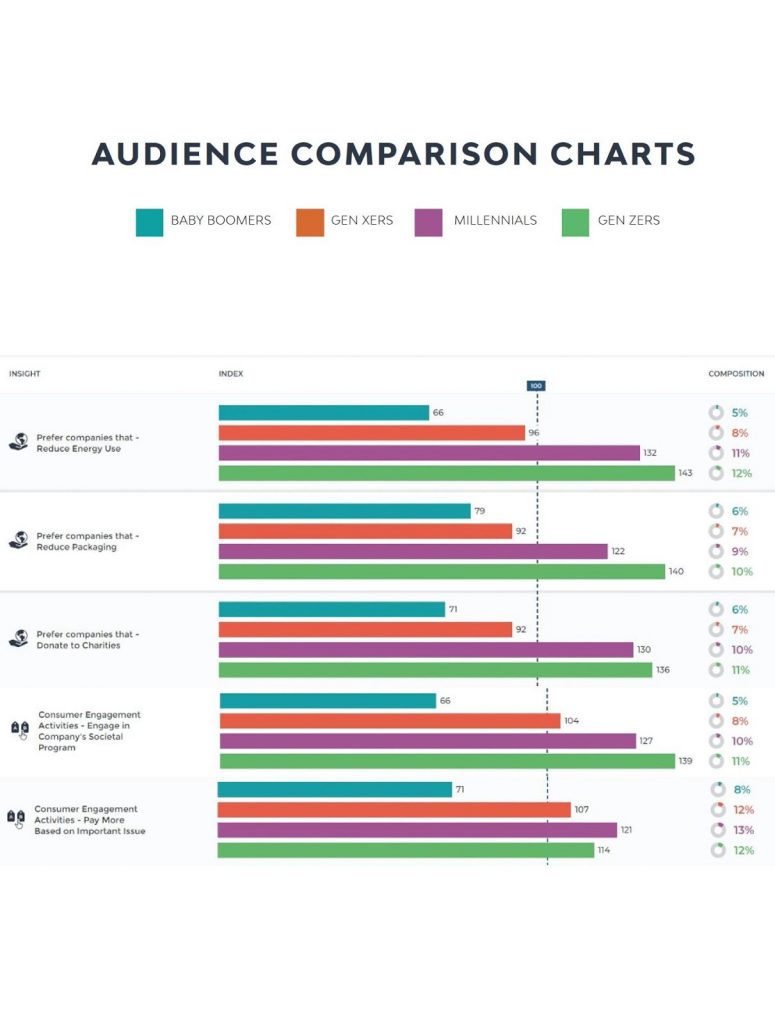 As I look at consumers that prefer companies who donate to charities, engage in social programs or speak-out on important issues, a surprising consistency reveals itself. Around 87–95% of ALL generational consumers would prefer a company or brand not to engage in this type of advocacy.

Bottom line: It’s clear that a very small percent of consumers want to hear about woke policies, activist issues, etc. from the brands and companies they consume or buy from.

In fact, the activist Gen Z and Millennial consumer is more concerned with companies that are helping to reduce energy use, then hearing about them on social justice issues (the data is clear that the small group of consumers that care about social activist issues are super-hot about it however).

Here is what you are not hearing from the media right now — the loudest voices are actually a small minority. It’s Twitter world vs. the real world.

But there is one more thing you must know…

Our data clearly shows that consumers want to watch sports — according to our data, ESPN doubled their ratings during April’s “Last Dance” marathon. Live Streaming (in general) is growing at an unprecedented level. The “want” for sports is as high as it has ever been.

But when the sports industry’s live events model is being completely disrupted, fans don’t feel safe. And when the industry’s leadership (owners and players) focus less on playing sports, than on telling you how to think and feel, it’s clear that they are heading towards very troubling waters.

This moment is not without precedent either. During the 2016 presidential campaign a subset of voters around the country, especially in Michigan, Wisconsin, and Pennsylvania were too fearful to express their support for Donald Trump. They were worried about how the woke mob would take them down for giving their honest opinion, but these voters had the last word on Election Day — propelling Trump to victory in an electoral college landslide.

Consumers are equally scared to voice their opinion right now, but they soon will — with their wallets. Athletes that support the cancel culture mob will severely damage their sport, their brand and their bank accounts.

Fans clearly want sports to bring us together. The sports industry would be smart to follow the data before it’s too late.

The various data reports cited can be downloaded for free: Just go to WinBigMedia.com, click on the “Covid-19 Consumer Research” tab on the top front page.

If you want to be the first to receive our new Coronavirus consumer sentiment data, subscribe HERE.

PS — My interview with old buddy James Altucher was fascinating. He sums it up best here →: “Everyone is trying to predict the markets, the economy, consumer behavior, etc. But what does the data say? I called up Phillip Stutts to find out. He just released a brand new report that reveals consumer behavior throughout the pandemic. It tells you exactly what to expect as the U.S reopens, how we’ll spend money, what we’ll care about, protests and being unheard, and why safety is becoming center in consumer marketing (and how businesses can do this successfully)”: https://omny.fm/…/the-james-altucher-show/598-phillip-stutts