NFL and NBA Reporter, Michele Tafoya, On Why She Walked Away 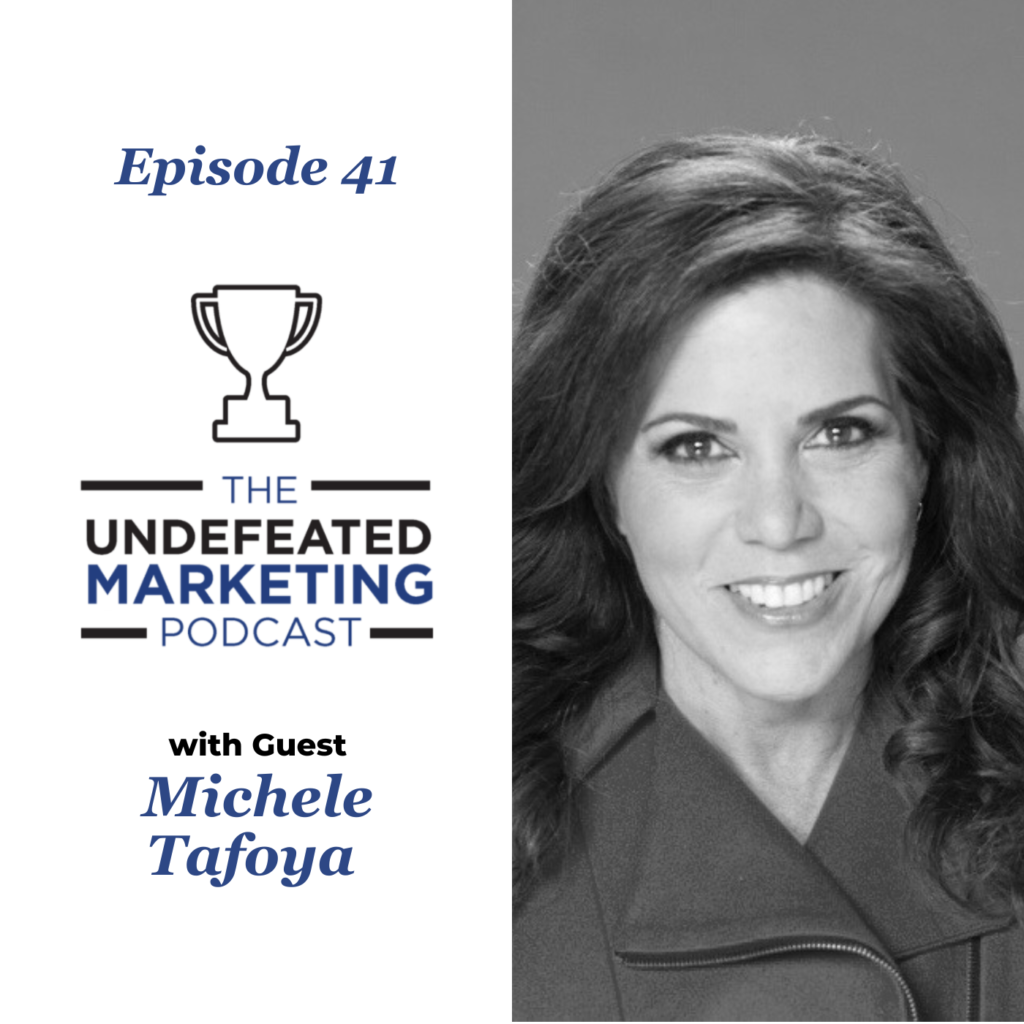 After an incredible career as the premier NFL sideline reporter for NBC Sports, covering five Super Bowls, Michele Tafoya made the courageous decision to leave it all behind.

How did Michele come to the decision to walk away from the monster brand she had built over decades?

Quite simply, she put her integrity above her ego.

Join me this week on The Undefeated Marketing Podcast for an exclusive conversation where the legendary Michele Tafoya and I take an in-depth look at marketing, media, family and the impact all of these elements have had on her career.

Oh, and if you are curious what Michele has to say about today’s hypocritical media? We go deep here too.

For me, this is an incredibly inspiring episode where Michele vulnerably talks about what led her to leave her coveted job as the #1 NFL reporter  – and the millions of dollars she made doing it – and what she learned from the re-launch of her new brand.

Do not miss this riveting conversation.

Michele Tafoya is a former American sportscaster. From 2011 to 2022, she was a reporter for NBC Sports, primarily as a sideline reporter for NBC Sunday Night Football. Record-setting, four-time Sports Emmy Award winner Michele Tafoya worked her final NBC Sunday Night Football game at Super Bowl LVI on February 13, 2022, her fifth Super Bowl. She retired from sportscasting the following day. In total, she covered 327 games — the most national primetime TV games (regular + postseason) for an NFL sideline reporter.

Tafoya, who began her sports media career in 1993, is the most-honored national television sideline reporter in U.S. sports (four Emmy Awards for Outstanding Sports Personality-Sports Reporter) and is also the only finalist for that Emmy in each year of its existence (since 2011).

A versatile talent, Tafoya has worked as the play-by-play announcer and as a studio host for men’s and women’s NCAA basketball and WNBA coverage, as well as sideline reporting for college football and basketball. She has been a substitute host on Pardon the Interruption and a panelist on Sports Reporters.

A native of Manhattan Beach, California, Tafoya graduated from the University of California at Berkeley with a degree in mass communications and earned her master’s degree in business administration from the University of Southern California. Tafoya and her husband, Mark Vandersall, have two children and a dog named Jersey. Today, she hosts the Sideline Sanity Podcast and makes television appearances on talk shows discussing the state of American politics and culture.

He is the Founder/Executive Chairman of Go Big Media (a political marketing ad firm), CEO of Win Big Media (his corporate marketing agency), and a best-selling author who shares his marketing secrets with the world in his two books, Fire The Now (2018) and The Undefeated Marketing System (2021).

Resource: The Undefeated Marketing System – How to Grow Your Business and Build Your Audience Using the Secret Formula That Elects Presidents (2021)

Thanks for listening!
Thanks so much for listening to our podcast! If you enjoyed this episode and think that others could benefit from listening, please share it using the social media buttons on this page.

Do you have some feedback or questions about this episode? Leave a comment in the section below!

Leave us an iTunes review
Ratings and reviews from our listeners are extremely valuable to us and greatly appreciated. They help our podcast rank higher on iTunes, which exposes our show to more awesome listeners like you. If you have a minute, please leave an honest review on iTunes.